Added to wishlistRemoved from wishlist 0
Add to compare
₹23,870.00

Added to wishlistRemoved from wishlist 2
Add to compare
₹11,454.00

Added to wishlistRemoved from wishlist 0
Add to compare
₹108,182.00

The Roland FC-300 MIDI foot controller gives you the power and flexibilty to control any performanced-based MIDI instrument or device with ease, onstage or in the studio. The FC-300 features two assignable expression pedals, two control pedals, nine footswitches and even more expandability, and can store up to 100 MIDI setups. Live performers will benefit from the unit’s two Amp Control switches, which control amps and effects. A three-way power supply (AA batteries, AC adapter, or via RRC2) and rugged construction ensure roadworthy dependability from the Roland FC-300.

Control and Expression
The FC-300 is outfitted with nine industrial-grade footswitches and two programmable expression pedals for fast, easy control and expanded performance capabilities. The backlit LCD offers a high-contrast view of patch names (when used with VG-99) and other important data, even in the darkest stage environments.

Power Patches
Up to 100 sets of MIDI messages/parameters can be stored simultaneously in the FC-300 as patches. Complex MIDI transmission is made simple, thanks to the FC-300’s ability to package chunks of data together in a single patch and transmit each data-burst via footswitch.

Programmable Switching
Two multipurpose switch jacks are built into the FC-300. These programmable outputs are an ideal feature for guitarists, as they allow amp channels to be switched from clean to lead, for example, in sync with patch changes on the FC-300. 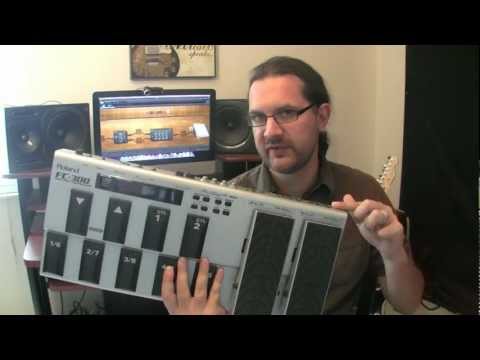