Added to wishlistRemoved from wishlist 0
Add to compare
₹22,668.00

Added to wishlistRemoved from wishlist 1
Add to compare
₹66,734.00

Added to wishlistRemoved from wishlist 7
Add to compare

Added to wishlistRemoved from wishlist 0
Add to compare
₹101,033.00

Building on the top-level tone and rock-solid reliability that’s made the CUBE name famous, the all-new CUBE-GX series turns up the heat with even more versatile operation and connectivity for Apple’s iPhone, iPad, and iPod touch. Small yet mighty, the CUBE-20GX is a potent tone machine with features and performance that easily make it the best value in its class. Three foot-switchable channels include JC CLEAN, LEAD, and a fully programmable SOLO channel, with built-in sound enhancement on tap in three independent effects sections. i-CUBE LINK turns the CUBE-20GX into a powerhouse for practice and mobile recording, providing a simple onboard audio interface for working with music apps on your favourite iOS devices.

With three independent channels and a wide selection of great guitar tones, the CUBE-20GX is ready for playing any musical style. The JC CLEAN channel provides the clean sound of Roland’s famous JC-120, while the versatile LEAD channel offers six tones to choose from. Included are distortion sounds from warm OVERDRIVE to the massive gain of EXTREME, plus a cool acoustic guitar simulator. The SOLO channel is fully programmable, allowing you to store all settings from either the JC CLEAN or LEAD channel, along with EQ and effects choices. Channels can be selected from the front panel or remotely via optional BOSS FS-5U or FS-6 footswitches.

Top-Quality Effects and Onboard Tuner

Onboard the CUBE-20GX is Roland’s innovative i-CUBE LINK interface, which lets you integrate with your iPhone, iPad, or iPod touch using a real guitar amp with a great tone. Unlike typical bulky and inconvenient iOS guitar interfaces, i-CUBE LINK connects to your device’s audio jack quickly and simply with the included cable, providing two-way communication with your favorite music apps. With i-CUBE LINK, you can play along with music tracks and send studio-quality guitar tones with effects straight into the recording app of your choice. The versatile i-CUBE LINK jack can also be used as a simple stereo input, enabling you to plug in nearly any music player or audio device and play it through the CUBE-20GX.

Available for free from the App Store, the Roland CUBE JAM app turns your iOS device into a fun command center for jamming, recording, and learning. Play back commercial songs and minus-one tracks through the CUBE-20GX via i-CUBE LINK and riff along for hours with the amp’s great tones. CUBE JAM also records audio through the i-CUBE LINK connection, letting you capture your jams with a single touch. After recording, you can adjust the volume of your guitar and backing music independently in the app, then export your mix to a 16-bit, 44.1 kHz WAV file. CUBE JAM also includes powerful tools for music practice, including independent speed and pitch adjustment of audio playback, Center Cancel to remove solos and create your own jam tracks, and more. 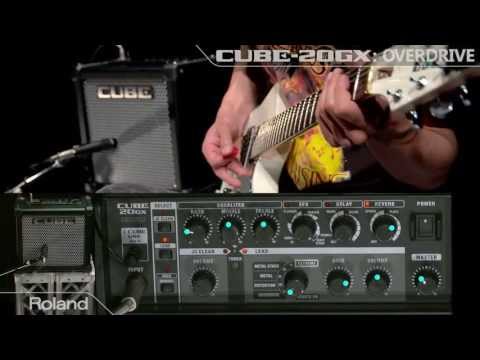 Roland CUBE-20GX Guitar Amplifier
Where to Buy
About Galaxy Digital